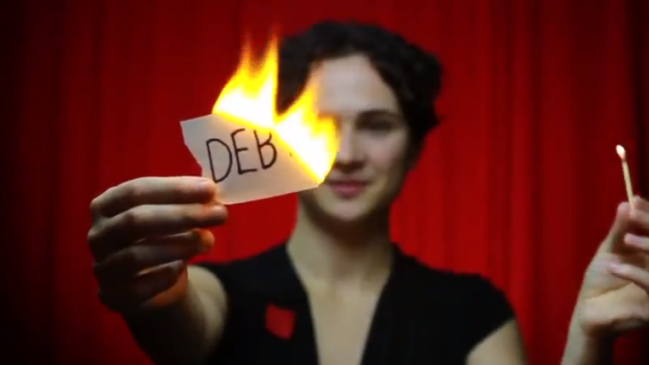 Rolling Jubilee is a project by Strike Debt collective, an offshoot of Occupy Wall Street. Inspired by movements around the globe and originating in New York City, Strike Debt now has affiliates across the United States. The flagship of their campaign played with almost messianic idealism and characterized by a skillful use of artistic competence, was Rolling Jubilee. The concept of the jubilee – an event in which all debts are canceled and all those in bondage are set free – comes from many faiths, including Judaism, Christianity, and Islam. Strike Debt claims that, as in Biblical times, the jubilee can still work today. Starting from the belief that people should not go into debt for basic necessities like education, healthcare, and housing, Rolling Jubilee buys debt for pennies on the dollar, but instead of trying to collect the amount owed, they cancel it. This is possible because banks sell debt for a fraction of its original value; in the shadowy speculative market, debt buyers purchase debt and try to collect the full amount from debtors. The Rolling Jubilee buys debt, keeping it out of the hands of collectors, and then abolishes it. They use the market to help others, and to highlight the predatory debt system and its effect on families and communities. It is a bailout of the 99% by the 99%. The exhibition features their campaign advertisement, which helped to raise over 700,000 dollars that the collective used to abolish 31 million dollars of debt.

The report presented in exhibition consists of the film work What Is the Rolling Jubilee?, licensed by the Museum of Modern Art in Warsaw for the duration of the exhibition. Courtesy Rolling Jubilee Fund.